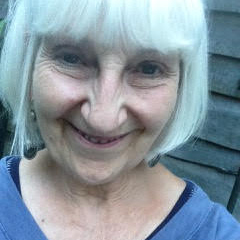 What brought me to the Alexander Technique – well, I was a mess. In a lot of pain (repetitive strain) and very stressed.

I come from Edinburgh, a beautiful city, but all I knew growing up was fear and I learned that it was better not to be noticed, and to see nothing.

I was rescued from obscurity by a wonderful English teacher who saw that there was some hidden talent in me, so I DID go to Edinburgh University where I studied English Lit and Russian, and Chinese. I loved University – got my MA – all the while concealing my fear of the world with an appearance of being confident and extrovert.

At that time the BBC were recruiting graduates like mad, so I found myself in BBC Radio in London. But I desperately wanted to escape my known world – so took the chance to go to Finland with the British Council to teach english as a foreign language. This was mind-blowing – like going back 200 years – they all had looms in their homes and so I learnt to weave and to cross-country ski across frozen lakes and in Lapland. I think I learnt more Finnish than the Fins learnt English! I stayed 2 years and then experimented with teaching in a very deprived secondary school in the borders of Scotland – terrifying! So again I ran.

I ended up in Algeria working for a British firm in the middle of nowhere, hastily brushing up my French. It was just after the French had left Algeria, but I loved the country and travelled widely – crossing the Sahara in a Renault-6 with three others – climbing to the Tassili cave paintings. I loved the space of the desert – and looking back now, I really took some risks!

On returning to the UK, I returned to the BBC – this time TV. Eventually moving to Norwich – working in local TV on everything from live programmes, to dramas and documentaries. I ended up completely ‘wiped out’ and in pain mental and physical. This was my bottom line – I realised that if I didn’t sort myself out I wouldn’t be around in six months time.

And that’s when I found the AT, having tried everything else first. I knew I had to change something fundamental in myself – and when I saw a leaflet saying ‘why not change the habit that’s causing the problem’ it rang a bell with me.

I drew a line in the sand.

I had heard of the AT years before at university but even though I was undoubtedly in a mess then, I didn’t realise it at the time. But 20 years later when I had my first lesson I thought ‘I don’t understand how, but this is enabling me to take control of my life’. I no longer felt that I was being dragged along by the tide. I used to think of life as a series of challenges that had to be overcome but when I decided to train to be an AT teacher (3 years full time training) I began to explore Alexander’s discoveries. I began to notice the excess effort I was making in everything I did. Experimenting and exploring I became more aware and was liberated from my habitual use. Continuing this exploration is an ongoing adventure.

I am registered as a member of the Society of teachers of the Alexander Technique (STAT).

Learn more about the Alexander Technique